The development of materials for next-generation lithium batteries keeps attracting serious attention from a plethora of researchers around the globe. Although there are a number of research initiatives at the moment, the big question remains: will lithium battery technology be able to meet the performance and life cycle challenges of convenient use in electric transportation such as vehicles or buses?

The answer starts with a look at advances in the materials that make up a battery’s different components — cathode, separator, and anode. Most contemporary research is oriented towards the development of new materials and the study of their electrochemical properties. The published results of this work are useful, but they still must be adapted to a commercial context. Indeed, from an industry standpoint, the challenges are not quite the same as what we witness in the laboratory. For instance, the cost and availability of the materials as well as the fabrication methods and conditions require careful consideration.

At the moment, we can distinguish two predominant technologies: the lithium ion battery (LIB) and the lithium metal polymer battery (LMP®), which are distinguished primarily by the makeup of the anode and the electrolyte-separating layer. The LIB anode consists of a graphitic material while the electrolyte separating layer consists of a liquid electrolyte-polymer matrix, whereas the LMP® anode is metallic (lithium) and the separating layer is a solid polymer electrolyte. The optimal use of each technology depends on a distinct set of pros and cons in terms of power output, capacity, and cyclability.

No less important are the unique manufacturing challenges associated with each design, a topic that is seldom discussed. While the difficulties of making different types of battery packs are similar, it is the steps in this process that create specific problems. It starts with an assessment of input materials, which will influence the reproducibility and long-term stability of the battery. For example, as key elements are obtained from chemical suppliers, they must be monitored for tight control of the size and distribution of graphite particles, molecular weight of the polymeric binding material, and purity of the lithium metal oxides or electrolytic salts. Such oversight is essential, as it will directly determine the preparation of electrodes as well as their long-term performance. 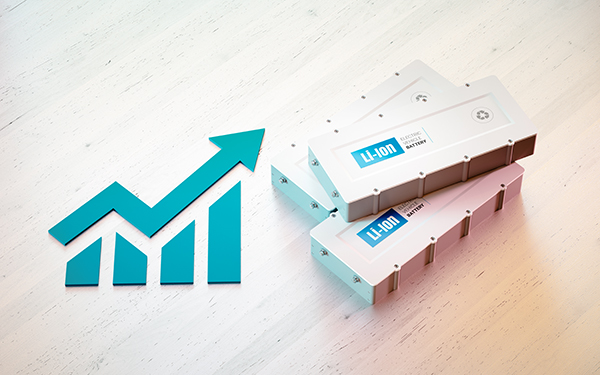 Battery features such as impedance, power, and cyclability are also inherently related to the structure of the electrodes and separating layer. In the case of LIB, where cathode fabrication combines lithium metal oxide with a conductive binding agent, great care must be taken to prevent a degradation of particle integrity that could compromise power output. In contrast LMP® electrodes are created by extruding an ingot of lithium until it becomes a consistent film about 50 to 100 um thick without holes or stretch marks. An accompanying film of polypropylene usually supports this sheet in order to provide a strict control of its thickness. Similarly, the thickness of an electrolyte separating layer must be precisely defined, along with homogeneous deposition of material.

Since an LIB electrolyte can react with moisture in the air, sealing this cell is a critical step in avoiding any form of blistering and release of toxic side products. This step is omitted in the manufacture of an LMP® battery, which has no liquid electrolyte to fuel such unwanted reactions.

Finally, before a battery is finished it must be characterized in terms of discharge, resistance, and capacity, which should deviate less than 5% within any given battery grade. This is confirmed through a series of charging and discharging sequences with increasing voltages, a process that can last as long as one to three days. This time-consuming sequence of measurements is not only costly but poses the risk of fire when some batteries malfunction. Nevertheless, such quality control is essential if LIB and LMP® batteries are to become the standard choice in electric vehicle transportation.

David Gendron is a research chemist with Blue Solutions, an energy storage firm based in Boucherville, QC.