For most of human history, fresh water was wherever we could find it. Communities were set up on flood plains to take advantage of natural irrigation, along rivers that lent themselves to easy availability or in regions rich with aquifers that could be tapped for wells. We have steadily freed ourselves from water’s geographical tyranny, finding ways to move it and treat it to suit the needs of large industry as well as burgeoning populations. Even as we continue to pollute vast quantities of this precious resource, we have become ever more skillful at cleaning up equally vast quantities for further use. Indeed, it is entirely possible a greater portion of humanity now has access to safe, pathogen-free water than at any time in the past.

We are expanding this skill set even further, not just making tainted water drinkable but actually augmenting supply or entirely creating that supply. Techniques such as reverse osmosis enable a desert-bound urban hub like Dubai to flourish by turning the undrinkable sea into fresh water. Israel, which has little in the way of its own natural water sources, now finds itself with an exportable surplus of the stuff thanks to an aggressive, decades-long desalination campaign. There is nothing particularly magical about this well-established technology but, depending on the cost of the energy necessary to drive water through large-scale osmotic facilities, it can be a very expensive way to slake a community’s thirst.

The economics of energy has traditionally driven the adoption of desalination and other water treatment techniques, with governments around the world forced to make hard decisions about their practical ability to provide people with this essential commodity. However, chemical innovation has introduced an entirely new factor into the calculations surrounding the feasibility of such methods. A novel polymer compound developed in Canada adds an entirely new dimension to the application of forward osmosis, potentially making it far more cost effective for purifying water. 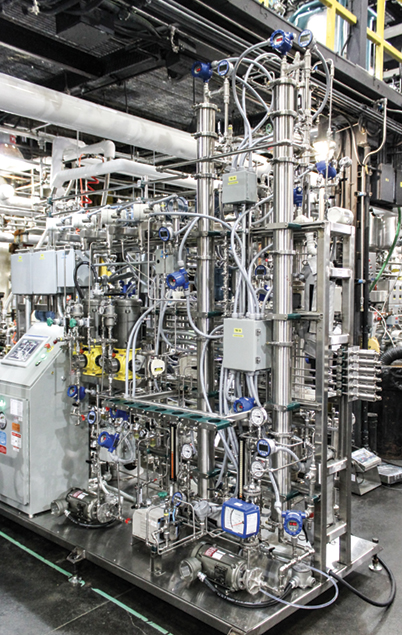 The origins of this technology began with Queen’s University chemistry professor Philip Jessop, who has spent more than a decade refining a number of “switchable” materials that become hydrophilic or hydrophobic through simple interaction with carbon dioxide. Jessop’s first efforts in this area were two-phase solvents and surfactants that rewrite a number of common chemical processes, such as the extraction of oil from soybeans. Rather than employing hexane to isolate this oil, then removing the solvent with an energy-intensive distillation, Jessop’s switchable solvent first captures the oil then switches to a hydrophilic form with the application of CO2, allowing it to be easily washed out with water. By eliminating flammable hexane from the undertaking, the extraction becomes safer as well as cheaper, offering an iconic example of green chemistry.

Such solvents were first marketed through Switchable Solutions, a company founded with the assistance of GreenCentre Canada, a Kingston, Ont.-based commercialization body that serves as a proving ground and scale-up site for the practice of green chemistry. Jessop, who is also the GreenCentre’s technical director, emphasizes that this field has less to do with improving the environment than improving industrial operations. When this strategy succeeds, he notes, both the environment and economic bottom lines should be better off.

Jessop has adopted this same attitude toward his most recent work, which consists of an aqueous solution containing a water-soluble amine or polyamine for use in forward osmosis. In contrast to reverse osmosis, which relies on the brute force of hydraulic pumping to create an osmotic gradient to entice fresh water out of a briny mix, forward osmosis employs a gradient generated chemically by a “draw” solution on the clean-water side of a membrane.

Forward osmosis can be more efficient than reverse osmosis but extracting the draw solute to obtain pure water has posed technical barriers to its widespread use. With a switchable solute, however, this step becomes much more straightforward. Mild heating causes the release of CO2 that transforms this material into a more volatile form that is much more easily separated and removed, leaving behind purified water. In addition, the draw solutes can be captured and regenerated for another round, adding to the overall efficiency.

Jessop points to practical ways in which users can cut costs. For example, if the heating is accomplished with waste heat from other equipment, then essentially no net energy is required to treat water this way. Nor is perfectly clean water always the top priority if it is only going to be recycled within the same plant. “There are all sorts of different applications and each one can have different requirements,” Jessop says. “Is energy the prime consideration or is the purity of water the prime consideration?” For example, if water contaminated by industry needs to be cleaned for use in further industrial processes, the energy input might be minimal to achieve this end. Alternatively, making the water potable could require more energy or even different agents. “We’re making different amines for drinking water than we’d use for industrial wastewater,” says Jessop, “because we’re optimizing for different parameters.” 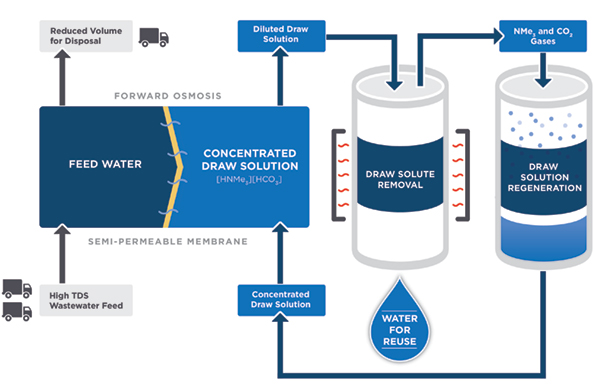 As part of his research, Jessop has collaborated with Queen’s chemical engineering professor Michael Cunningham to develop CO2-switchable polymers, including soluble polymers for water purification and insoluble polymers to serve as switchable particles. The colloidal stability of the polymer particles can switch from stable to unstable with CO2. Cunningham describes these products as variations on well-known polymers that can be made to switch their pH with the addition of hydrochloric and sulphuric acid, only in this case the triggers are much more benign — CO2 and air.

Cunningham adds that this work has also led to the development of particles that can be used for chromatographic separations or to dry out industrial alcohols for storage and transport. As compelling as these new avenues might turn out to be, he acknowledges that dealing with dirty water is the matter of most immediate commercial interest. “Anything around water purification and treatment is a huge concern. Any methods we’re trying to develop with CO2-switchable polymers are designed to be much less energy intensive,” says Cunningham, referring to the significant fuel requirements demanded by all current methods. “You would like to be able to use them in parts of the world where energy is more expensive or simply less available.”

Shortly after these forward-osmosis amines were patented, GreenCentre licensed them for a new company, called Forward Water, which was founded in 2012. The company uses a distinct class of non-polymeric small-molecule amines in its current activities. Howie Honeyman, who left his post as GreenCentre’s CTO to become Forward Water’s CEO and first full-time employee, says the range of applications for these agents should be considerable. “It met all the criteria,” Honeyman recalls as his rationale for setting up the fledgling enterprise. “The technology was robust, the science was sound and there was a defined commercial need.”

Over the past few years Honeyman has been building the means to demonstrate the viability of this process to potential clients. The centrepiece of these efforts is a room-sized pilot plant built to the specifications that would be demanded by an industrial operator. By way of example, Jessop points to delivery pipes that had to be at least 10 centimetres in diameter, at which point surface effects stop having any measurable effect on flow. “This is the minimum size they could operate where the data would still be scaleable and trustable,” says Jessop, adding that such details can determine the credibility of academic inventions that are being showcased in a commercial marketplace. “Technology like this, if you can’t show that it works at scale, nobody wants it.”

The construction of such equipment regularly poses a fundamental obstacle to the success of process chemistry start-ups. GreenCentre was able to strike a deal with Xerox Canada so that Forward Water could use one of the giant multinational’s buildings in Mississauga, Ont. — along with some of its skilled staff — to build the pilot plant. “I really have an extended company,” says Honeyman, referring to the professional resources that he has been able to leverage through GreenCentre. “It’s a unique situation.”

Along with those resources Honeyman has been able to ask prospective clients to contribute tonne-sized samples of the wastewater they might want processed and test them in the facility. Those trials have enjoyed broad success, which has encouraged him to consider studying the technology to find its best applications. “We’ve gone through a laboratory demonstration, which was done through GreenCentre, and taken it all the way to an engineering demonstration using fully scaleable, fully commercialized unit operations that the engineering community can look at and move into the field.”

Honeyman also hopes to share some kinship with Apple founders Steve Jobs and Steve Wozniak, who carted their own prototype — one of the first desktop computers — across the United States on a now-legendary tour of prospective users’ offices. Only after demonstrating this hardware at work, on terms set by these same future customers, would they ever agree to buy it. In this way, Honeyman says, good ideas become products that thrive in the limelight of the marketplace. “Ideas are great but there’s just a small community of people who are willing to commit to an idea. The early adopters of a technology like this really need to see hard-core, scaleable data. Unless you have that, you’re not going to get their time and attention. That’s really the journey one has to go through with a technology like this.”

The patented solvents developed by Queen’s University chemist Philip Jessop alter their solubility properties in response to simple CO2. This technology became the basis for GreenCentre Canada’s first spin-off company Switchable Solutions, which was launched in 2011.

When a switchable hydrophilicity solvent (SHS) is in its “off” form, it behaves like most oils and will not mix with water but will dissolve the hydrocarbons found in a mixture. If CO2 is bubbled through this mixture, the resulting reaction makes an SHS water-soluble. Once this happens, the solvent and any hydrocarbons it targets can both be readily isolated and separated from the rest of the contents. By extracting the CO2 gas from the system, the SHS reverts back to its “off” form for easy recovery. Now in the two-phase state where the process started, both the water and SHS can be recycled for further use.

While comparatively simple in principle, the SHS could have a profound impact on many major chemical procedures. For example, bitumen extraction in the oil sands currently relies on distillation through steam-stripping or direct heating. Either option is energy intensive and expensive, as well as requiring flammable, toxic solvents to complete. An appropriate SHS could do the job much more safely, with fewer environment consequences and with far less energy — three of the essential pillars supporting the field of green chemistry.