November/December 2018 > Why attend a conference? CSChE 2018 participants share their motivations

Why attend a conference? CSChE 2018 participants share their motivations

The 68th the Canadian Chemical Engineering Conference drew around 1300 people to Toronto this fall. The conference was held in conjunction with the Interamerican Congress of Chemical Engineering and so drew participants from throughout the western hemisphere. These participants, including anyone from undergraduate students attending their first conference to academic and industry leaders in their fields, had a rich mixture of motivations for attending the conference. 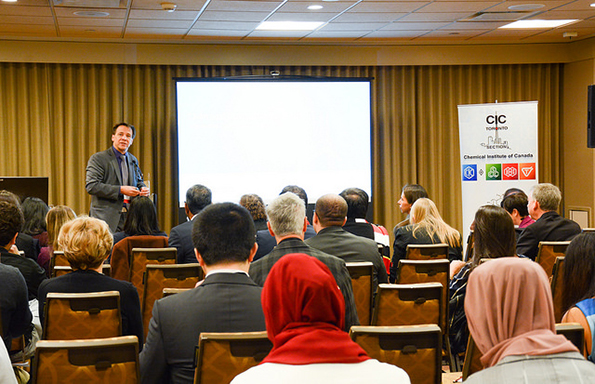 But while networking may have been one of the most obvious benefits of taking time out of one’s regular work schedule to attend the conference, it was far from the only reason. It also represented a valuable opportunity to celebrate the lives and accomplishments of leading figures within Canada’s chemical community.

“Whenever you have superstar researchers around, you’re going to attract the best people,” said Molly Shoichet, a professor in the University of Toronto’s Department of Chemical Engineering and Applied Chemistry. Speaking as a member of the conference organizing committee, she added that it was a particular pleasure to organize a track of sessions to honour the outstanding legacy of her university colleague Michael Sefton, FCIC.

“He’s really the father of biomedical engineering in Canada,” insisted Milica Radisic, another U of T chemical engineering professor who took part in planning this tribute. She acknowledged a desire to keep networking as well, but in contrast to students who may simply be trying to map out the dimensions of the community, her focus was on identifying potential partners for her work as the Canada Research Chair in Functional Cardiovascular Tissue Engineering.

Another academic who was being honoured by friends and proteges was Don Mackay, the founding director of the Canadian Environmental Modelling Centre at Trent University. He created a series of fugacity models that ushered in a powerful new perspective on the role of chemistry in environmental assessment, as was outlined by a number of his former students and colleagues who credited their careers to his influential insights. Among them was Elizabeth Edwards, who recalls first encountering Mackay’s ideas as a graduate student at Stanford University, where they served as a pointed reminder of Canada’s major contributions to this discipline. She suggested that the conference was itself a measure of just how encompassing the many facets of chemical engineering have become.

“The applications are innumerable,” she argued. “So the challenge with this conference is that there are core chemical engineering, mass/energy balance-type phenomena to be discussed, but then there’s all these other topics that use chemical engineering tools. Most of us usually go to much more targeted conferences within our areas of specialization, as opposed to something like this that’s so broad.”

That extensive scope was also what appealed to the many students present. Among them were Lori Anthony and Cassidy Wright, two undergraduates at Dalhousie University who were eager to announce their role as organizers of next year’s Undergraduate Student program, which will be held with the conference in Halifax.

“This conference generally features people from central and western Canada,” explained Anthony. “We want to see the east coast represented as well.”

That rationale was especially meaningful for Wright, who is originally from Saskatchewan but has since experienced the value of the chemical engineering community from within the Maritimes. “This is an exciting event and we want to make sure it reaches all corners of the country,” she said.

Like so many of the students at the Toronto event, they welcomed the prospective mentorship that might be available at such gatherings. And the individuals who could mentor them were no less enthusiastic. Keynote speaker Robert Magee, president and CEO of the Woodbridge Group of Companies, made that clear in his opening address, which called for a greater emphasis on the latest digital technologies in the chemical engineering curriculum. He also appreciated that his message was reaching the many students who had made their way to the conference.

“They’re starting out and I’m just hopeful that I can give them a little advice that will help so they can use more tools with more leverage than they would otherwise have,” he said, recalling how much his own career path had benefited from the input of senior people who took the time to point out various pitfalls and prospects. “Now I’m that guy.”