The farmer in the lab

Chemistry professor Michael Organ has taken on some tough puzzles in organic chemistry and added to the roster of industrial tools for synthesizing valuable materials.

Over the past decade, as a member of York University’s Department of Chemistry, Organ and his team developed one of the world’s most widely used systems for palladium-mediated cross-coupling, pyridine-enhanced precatalyst preparation stabilization and initiation (PEPPSI) and explored the concept of using microwaves to promote capillary flow for organic synthesis. He also unravelled the workings of one of the most important chemical discoveries of the 20th century — the Negishi Reaction — and extended its capabilities to create entirely new possibilities for the 21st century. Most recently he was named director of the Centre for Catalysis Research and Innovation (CCRI) at the University of Ottawa, where he will oversee one of the country’s major assemblies of catalytic expertise in pure chemistry, engineering and medicine. To top it off, Organ is also this year’s winner of the Canadian Society for Chemistry’s R. U. Lemieux Award, which celebrates distinguished contributions to organic chemistry.

In the face of such accomplishments, it is downright disarming to learn that Organ cleaves to a farmer’s practical outlook on the universe. He retains an unadorned desire to make things work as well and operationally simply as possible. This is no coincidence, for he grew up in the thriving southern Ontario agricultural belt between Guelph and Hamilton. In fact, he originally envisioned himself skipping higher education altogether and running the family farm, an option that he acknowledges still looks good to him on days in the office when he is swamped with grant applications or sorting out problems with scientific instrument vendors. “I have a simple view of life,” Organ says.“Real innovation comes at the grass roots.” 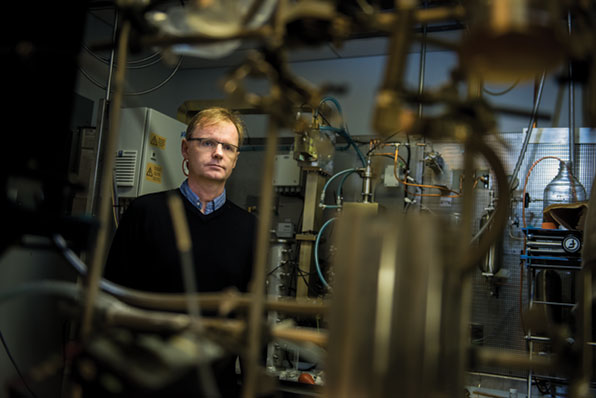 Professor Michael Organ in the York University laboratory where he has explored the use of microwave­ radiation in flow chemistry, one of his many materials synthesis pursuits. Photo credit: Terence scarnicchia

In his case, it sprang literally from those roots. It was a number of mentors, Organ recalls, who guided him toward scientific challenges that appealed to his rural perspective. In the 1980s, while working at the University of Guelph’s research station near the small town of Elora — “a job I got primarily because I already knew how to drive a tractor” — plant crop science professor Steve Bowley pointed him at a project that placed plastic bags over crop plants in order to measure their ethylene output. Botany professor Derek Bewley subsequently assigned him to study the accumulation of phytic acid in cereals and grains; the plants employ this saturated cyclic acid to store phosphorus and important metal cations. Later, chemistry professor Gordon Lange supervised Organ’s PhD, which examined natural products and photochemistry, two areas he continues to actively pursue.

Organ credits each of these men with showing him the way from the farm field into the laboratory, where he has been busy ever since. Over the years he has assembled several laboratories from scratch and enhanced their potential, always with an eye toward the next step. Building up ambitious research enterprises can be straightforward, he notes, thanks to supporting federal and provincial agencies, which helped him outfit a lab with state-of-the-art technology. Keeping those same enterprises going is another matter. “The big concern is figuring out what happens when your service contracts end,” Organ says, again bringing the farmer’s conservative perspective to the fore. “Too many well intentioned and otherwise competent undertakings fall apart because there is no practical plan in hand to sustain the infrastructure the day after the money runs out.”

For just that reason, Organ has regularly collaborated with industrial partners around the world who provide him with the direct and indirect support necessary to make sure that everyone keeps on working — above all on projects that will have some impact. He does not draw the traditional line between pure and applied science, instead looking only to solve problems wherever they happen to crop up.

That attitude has led Organ to celebrated breakthroughs such as his work in flow chemistry. Around 2003, Organ and his colleagues developed an approach to organic synthesis that employed microwave radiation to flash heat reagents as they flow through capillaries. The technique continues to show promise in drug discovery and the analysis of natural products, where it can accelerate progress by reducing reaction times from days down to minutes or seconds.

Organ also started to examine cross-coupling reactions that make it possible to link organic groups and form complex molecules. Although these reactions have become a mainstay of materials synthesis, their application to certain sensitive molecules is limited by temperature or pressure requirements. Some reagents were shutting down the activity of widely used palladium catalysts, an observation that prompted Organ to take a closer look at its inner workings. “We weren’t the first people who looked at heterocyclic carbenes as ligands,” he says, “but we and a number of other people started to look at them at a very fundamental level.”

With the help of some talented graduate students and postdoctoral fellows, that inquiry made a key distinction between the role of N-heterocyclic carbene (NHC) and phosphine (PH3), which many observers had thought were equivalent participants in the cross-coupling. “Phosphines never met a palladium or a late-transition metal that they didn’t like,” he says. “Carbenes don’t. People think that under the basic conditions you’ll de-protonate the salt, make the free carbene, it’ll jump on the metal and away it goes. What happens is that there are other things present, such as solvent, that the carbene can insert itself into and effectively kill itself.”

Organ solved this problem by pre-forming the NHC, which led to the creation of PEPPSI catalysts that he published in 2006 and patented as the centrepiece of a new business. Not only does this strategy link materials that would otherwise refuse to cross-couple, the method has been refined to function within a wider set of environmental parameters and can even be conducted on a standard bench top without the need for a glove box. “We can cross-couple together substrates now at room temperature and in some cases zero degrees that formerly required temperatures over 100 C,” says Organ, referring to a desire on the part of manufacturers to minimize heat-related damage to particular materials and to minimize energy consumption.

More recently, Organ’s desire to unravel the basic chemistry of cross-coupling led to a fresh take on the Nobel-prize winning research that jump-started this field in the 1970s. Known as Negishi cross-coupling, after Purdue University Professor Ei-ichi Negishi, this technique made it possible to link organic groups for an unprecedented array of complex molecules. The method transformed production in fields ranging from pharmaceutical manufacture to electronics. But by the 1990s, Organ became aware of the need to evaluate a little more carefully the mechanism by which it works, based on some insightful observations made by his research team.

Organ continued to look for ways of optimizing the efficiency of the Negishi reaction, which resulted in a finding that the American Chemical Society dubbed one of the most notable synthetic chemistry discoveries of 2014. In this case the improvement followed the addition of a metal halide salt (such as lithium bromide), which Organ concluded is always part of the reaction but had been previously overlooked because of how the organozinc reactants were prepared.

Commercial zincs, Organ says, are prepared using the Rieke protocol that leads to the production of two equivalents of salt in the mixture. Since this constituent was not deleterious to the couplings it was simply ignored and its presence forgotten for decades. When Organ’s group prepared the zinc reagents using a different protocol that did not generate the salt byproduct, the coupling stopped. An in-depth investigation revealed that the salt leads to the formation of zincates, which are essential for the Negishi coupling to occur at all with alkylzincs. With the role of salts in cross-coupling revealed, their use can be formally manipulated to even greater effect.

Most of this work has been conducted at York University, where Organ has been a member of the chemistry department since 1997. Surrounded by dozens of chemical companies in the Greater Toronto Area, he admits that there is essentially none of the same commercial chemical backbone to be found in Ottawa. But for him, that is precisely the point. “What I’m looking to do is build up specialized industries there,” he says.

The foundation of these industries will be a sweeping set of facilities and people that were originally brought on board by Ottawa’s then vice-president of research, Howard Alper, FCIC, himself a formidable chemist who ushered in the CCRI in 2000. The organization includes 38 faculty members in chemistry, engineering and medicine and labs scattered around the university’s two main campuses. 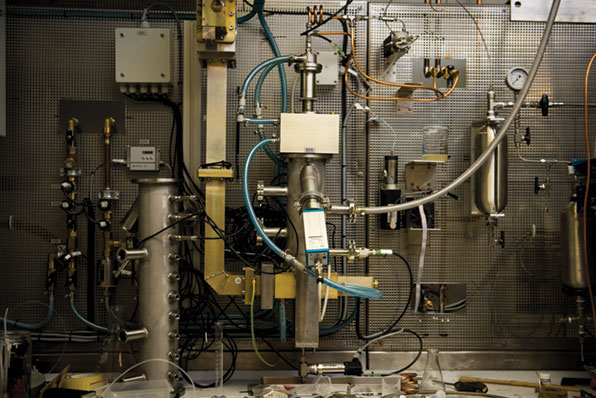 Alper notes that the CCRI was built up over the years by a panoply of talented individuals, including the late Keith Fagnou. “We are proud of uOttawa’s Centre for Catalysis Research and Innovation, a leading global centre addressing significant issues in key areas of catalysis,” Alper says. “We have been fortunate to have had Abdel Sayari, FCIC, and Tom Baker as directors and we now look forward to imaginative and bold leadership by Michael Organ.”

CCRI member Deryn Fogg, FCIC, echoes that sentiment and traces her own enthusiasm to the first time she encountered the earthiness and frankness reflected in Organ’s rural background. “He was excited about the opportunities and has no time for ego and power games,” she recalls. “His vision addresses the challenge of sustainability while addressing a much bigger set of opportunities for the centre and for the country. We’re in a very special position. We’re the largest catalysis centre in the country and we’re also a presence on the world stage.”
For his part, Organ is no less enthusiastic about becoming part of what he calls the university’s “shining apple” — namely its chemistry department. Nor is he in any hurry to leave behind his operations at York U, where he still spends about half of his time sitting on committees and ensuring that various research programs continue apace. Organ estimates that it could take him a couple of years to make a full transition to Ottawa, giving everyone enough time to adjust to his new role.

As always, Organ aims a critical eye toward what happens next, citing a list of major projects that he intends to roll out annually over the next seven years or so. Having worked closely with McMaster University over the past decade and a half on a high-throughput approach to the synthesis and screening of potential pharmaceutical compounds, Organ believes that he can build on that experience to bring the catalytic chemistry resources of the CCRI to bear on solving the biomedical problems being investigated by uOttawa’s Faculty of Medicine. He also intends to establish a sustainable manufacturing centre, along with building firms based on novel catalysis technologies.

Above all, though, like any good farmer, Organ is looking forward to nurturing a crop of new ideas he expects to emerge within the diverse population — from undergrads to emeritus professors — at the CCRI.