Chemistry research in Canada pre-dates Canada itself. In the 1840s, decades before confederation, British ex-pat Henry Holmes Croft became the first chemistry professor at the University of King’s College, the precursor to the University of Toronto. Croft developed a method of removing sulphur from Sarnia oil wells, making the oil safe for household lamps. He was a pioneer in forensic chemistry, championing the arsenic-detecting “Marsh test” that ultimately foiled many an arsenic-poisoning plot.

Croft was also a beloved teacher and mentor who encouraged his students to embrace new ideas and innovative approaches to research. The creative culture he fostered spread to university after university across the country. As Canada celebrates its sesquicentennial, we look at a few of the many areas — famous and not — where this country has punched above its weight in chemistry research. 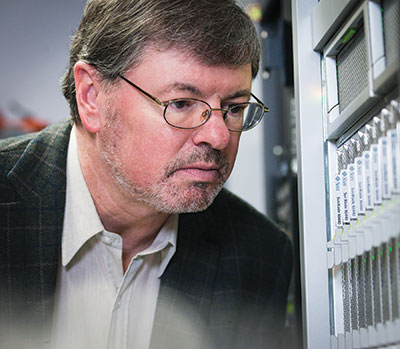 Like many Canadian chemistry researchers, Axel Becke, FCIC, came from somewhere else. Born in Germany, he studied at Queen’s University and McMaster University before establishing himself at Dalhousie University in Halifax. A highly cited and much-honoured computational chemist, Becke is best known for his work in density functional theory. His fundamental work on determining the electronic structure of atoms and molecules now drives applications ranging from drug discovery to nanotechnology.

Becke’s work is a testament to the capacity of small-scale creativity: he has authored or co-authored 80 papers, two of which made Nature’s list of the most cited science papers of all time.

McMaster University professor emeritus Ronald Gillespie, HFCIC, (together with Australian Ronald Nyholm) developed valence shell electron pair repulsion theory. The two Ronalds demonstrated how to predict the geometry of a molecule from the number of electron pairs surrounding its central constituent atoms. They first put forth their simple, elegant “VSEPR theory” in 1957. Since then, the theory has been developed and refined, becoming a fundamental component of freshman chemistry classes around the world.

In the 1960s at the University of Waterloo, Jiri Cizek and Josef Paldus made their mark by borrowing a method from nuclear physicists to describe many-bodied systems and applying it to the field of quantum chemistry. Their work adapting and developing coupled cluster theory helped make it one of the most widely used, flexible and effective means of calculating a wide range of atomic phenomena.

Cizek and Paldus, both of whom had strong mathematical backgrounds, originally used the technique to calculate the ground state energies of closed-shell atomic nuclei. In the ensuing decades, though, further refinements have made it the go-to technique for calculating excited states, including in open-shell atoms, as well as for many other properties such as phase transitions, spontaneous symmetry breaking and topological excitation.

Kelvin Ogilvie in his Acadia University chemistry lab in 1988.

Born in Nova Scotia, and a former chemistry professor at the University of Manitoba, McGill University and Acadia University, Kelvin Ogilvie, FCIC, is a quintessential icon of Canadian chemistry research. Now a Canadian senator, Ogilvie has a storied research career, the pinnacle of which came in 1981 when he revealed the “gene machine,” an instrument that automated the process of manufacturing custom strands of DNA. Not only was this a boon for biochemistry research but it also made possible the large-scale manufacture of materials such as insulin and human growth hormone that previously had been harvested from limited natural sources.

The University of Toronto’s Geoffrey Ozin, FCIC, has gained worldwide renown as one of the fathers of nanochemistry, which is the study of atomic and molecular structures at the nanometre size. At this scale, systems transition between classical and quantum properties, exhibiting many unusual and varied behaviours.

In the 1970s, Ozin pioneered methods for manufacturing and manipulating metals, crystals and other constructs at the nanometre scale. That work helped create this new branch of chemistry that now finds application in biomedicine, polymer chemistry, product synthesis and a host of other areas.

Reuben Sandin taught and researched chemistry at the University of Alberta from 1922 to 1965 and carried on as professor emeritus until 1988. A pioneer in the wide-ranging subject area of halogen organic chemistry, who did his major work in the 1940s, Sandin was known both for synthesizing chemicals used to treat cancer and also for creating some of the first stable bromonium and iodonium ions. These ions are important intermediates in materials synthesis and are still used to manufacture many industrial and pharmaceutical chemicals.

Like so many Canadian chemistry researchers, Sandin was also a revered teacher. Not only did more than 200 of his students acquire PhDs in chemistry but his work also helped Canadian universities assume a leadership role in organic halogen research that continues to this day.

Although many scientists know Steacie best as a passionate advocate and statesman for Canadian research, he was equally renowned for his research in free radical kinetics. Steacie came to McGill University as a student in 1920 and remained there for much of his research career, advancing techniques for measuring rates of chemical reactions and revealing the mechanisms behind them.