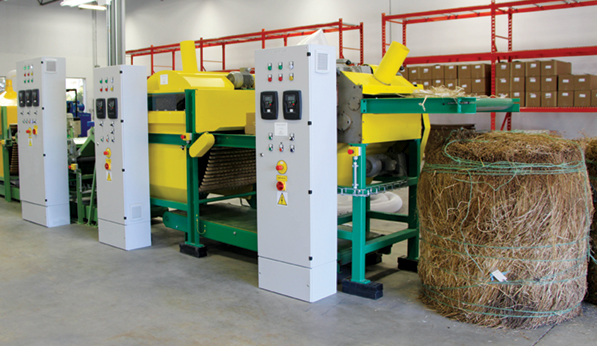 The automated process of decortication, which separates natural fibres such as hemp or flax from the remaining components of the plant stem, is carried out at FibreCITY, a Winnipeg-based centre of excellence for agricultural fibre grading and an initiative of the Composites Innovation Centre. Photo Credit: Composites Innovation Centre Manitoba Inc.

Order up the raw materials for a batch of fibreglass composite and you will also receive a detailed list of measured physical specifications for each and every ingredient, so there will be no surprises when combining them. But in the emerging world of biocomposites, made from agricultural products such as plant-based fibres and naturally derived resins, it has been difficult to come up with an equivalent list. That could soon change thanks to research from the Winnipeg-based Composites Innovation Centre, a not-for-profit technology development organization.

There are some good environmental reasons for replacing the petroleum-based constituents of traditional composites. Vehicle manufacturers, for example, should welcome the prospect of turning out parts such as body panels from constituents that would significantly reduce the carbon footprint of their industrial operations — along with any associated carbon tax levy. Nor would these parts linger on in ever more crowded landfills once they have been discarded but instead turn into nothing more problematic than usable compost.

Nevertheless, such innovation will not be possible until manufacturers know exactly how these materials will perform once they have been incorporated in a finished product. The answer to that question could emerge from genomics, which could take stock of the specific biochemical characteristics associated with plant species like hemp or flax — flagged as promising candidates for industrial bio-composite applications. “Weather conditions can change from year to year, along with soil conditions,” says Shawna DuCharme, a materials engineer with the innovation centre. “Understanding that variability is important when it comes to assessing materials as they’re being taken off the fields.”

The centre has therefore created a laboratory specifically outfitted to understand and grade the quality of biofibres. Dubbed the Prairie Agricultural Fibre Characterization Industrial Technology (FibreCITY) initiative, this facility includes equipment such as a pilot scale decortication (fibre separation) line and material sectioning equipment for processing and preparing samples of biofibres and biocomposites, along with various analytical instruments for mechanical and chemical property evaluation and high magnification imaging.

The activities of FibreCITY got a big boost this spring with the announcement that Genome Prairie, the regional arm of the national research network Genome Canada, is providing $3.3 million over the next three years to support the collaborative FiCoGEN project, which is developing and testing a prototype of a vehicle part made of biocomposites. This project involves a collaboration with the University of Manitoba, which is looking at new types of resins that will better bind to agricultural fibres to optimize performance.

“We’re applying tools that were originally developed for human genomics to industrial processes,” says David Levin, a member of U of M’s Department of Biosystems Engineering, who specializes in molecular biology and biotechnology. Levin’s research group has isolated bacteria that can make natural polyester polymers. “We sequenced their genomes, looked at their gene product expression and found that these bacteria can make polymers of different monomer composition under various growth conditions, with different carbon sources,” he says. “Those monomer compositions determine the physical and thermal properties of the polymers.”

Over the next three years, Levin adds, this work will optimize the cross-linking that these polymers can provide to a composite material made from flax fibres, which will subsequently be tested in the body panels of a small vehicle called the GO-4, which is being produced by Winnipeg-based Westward Industries. “If we can prove the concept with this vehicle,” he says, “if we can make some materials that are as strong as or as light as fibreglass using fully green, fully biological components, then that technology can be applied across the board to benefit the automotive industry.”