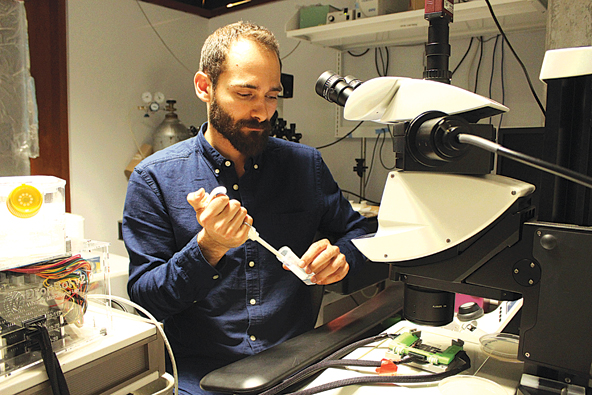 Scientists around the world study cell cultures laid out in flat, two-dimensional (2D) arrays — a highly practical but ultimately limited way of understanding how those cells behave.

“Everyone — and I mean everyone — can agree that three-dimensional (3D) tissue models are far superior to the traditional monolayer of cells in a well, which is what we’ve been doing for the past several decades,” says Aaron Wheeler, a professor in the University of Toronto’s Department of Chemistry. “But despite the fact that we all agree that this is a good thing to do, it isn’t done very much,” Wheeler says.

There are in fact some practical reasons for avoiding 3D arrays. At the top of the list is the serious day-to-day problem of inserting nutrients and removing waste products from this medium, which is typically a hydrogel matrix. If you do not penetrate deeply enough into the matrix, reagents will not make their way into the entire cell culture, nor will they be extracted. On the other hand, if you work hard to ensure that these processes are completed, you risk physically damaging the culture.

Wheeler turned the problem over to one of his doctoral students, Irwin Eydelnant, who built upon the simple idea that when it comes to 3D cell arrays, less might be more. Employing a typical 2D well of 200 microlitres, Eydelnant set up a 3D environment that was just one millimetre long and less than 100 microns high. Cells thrived in this setting, which required little physical manipulation. “Depending on the diffusion constant of an analyte, the system becomes equilibrated in a matter of minutes,” says Wheeler, explaining that passive diffusion does all the work. “It’s purely a function of the fact that there are small distances for the molecules to travel. We didn’t set out to solve that problem, but that’s one of the things to emerge from our discovery.”

Wheeler, Eydelnant and another colleague Bingyu Betty Li published the findings in Nature Communications earlier this year. Wheeler regards the technique, called digital microfluidics, as a novel way to generate small, individually addressable gels for a variety of 3D investigations. Among the possibilities is isolating a single cell in order to study its behaviour, which could be quite different than it is in a typical 2D setting. “There are some fundamental questions there that mark a grand horizon for the field,” Wheeler says.